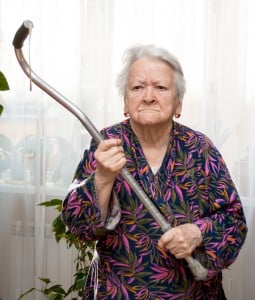 Q: My mother is 80.  She is very active (despite breaking her hip 2 years ago), she still attends water therapy 3 times a week at the YMCA, she drives to the base (which is 20 miles away) and pays her bills on time.  She is a retired Psych nurse and has shown signs in the past of paranoia.

Lately, she has “heard” voices of her grandchildren in her home and called my sister. She also has difficulty with getting the right words to say out and has her sleep pattern out of whack and will call people at odd times of the night.  With her independence comes the fact she won’t share any medical information because she thinks we are out to get her committed.

How can I test her/question her to find out the level of decline she may be in to make sure she is safe? — K

A: Great question. As you may know, it’s fairly common for aging parents to develop problems like the ones you are describing. Understandably, these problems are frustrating and worrying for adult children.

You are absolutely right to be concerned about your mom’s safety. I do have some ideas for how you can get started assessing her, which I share below.

But first I want to explain the most common causes of this type of behavior in older adults. That’s because one of the things you must do is help your mother and the doctors figure out why she’s developed these behavior changes and other symptoms.

A fair number of people don’t get around to the medical evaluation because they assume that these crazy behaviors are either normal aging (definitely false) or dementia such as Alzheimer’s (true about 40% of the time).

Still, it’s worth persisting in this, because many causes of paranoia or other odd behavior in older people can be treated.