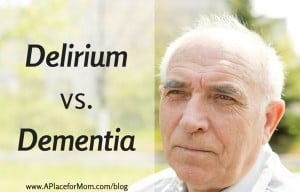 Pop quiz: What senior health problem is extremely common, has serious implications for an older person’s health and wellbeing, and can often – but not always – be prevented?

It’s delirium, which affects about 30% of seniors during hospitalization. (Rates are much higher if there’s been a surgery or if the person is in the intensive care unit.)

People sometimes refer to delirium as “post-operative confusion,” or “ICU psychosis” or even “hospital dementia.”

Delirium is extremely important for family caregivers to learn about, because families are often the first to notice that senior isn’t himself or herself.

So I’ve written a comprehensive article for A Place for Mom, covering the definition of delirium and all the essential things you should know. You can find it here:

In this article, I explain:

I also cover ten important things to know — and do! — about delirium:

To get the details on these ten things to know and do, read the full article here.

And then visit one of my favorite family sites for delirium, which is the Hospital Elder Life Program website.

Here are links to some of the resources I reference in the article:

Last but not least, for my previous posts on delirium:

If you have any additional questions regarding delirium, please post them below!

« 4 Steps to Get Better Advice from Doctors
Q&A: What You Can Do if You’re Worried About “Incompetence” »