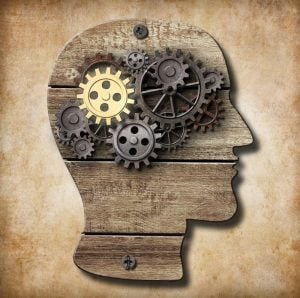 It’s annoying but unfortunately true: most parts of the body work less well as one gets older and older.

This is even true of the brain, which is part of why it becomes more common to experience a “tip of the tongue” moment as one gets older.

Such age-related changes in how the brain manages memory, thinking, and other mental processes are called “cognitive aging.”

Understanding how aging changes cognition is important. It can help you understand what to anticipate when it comes to your own aging. It can also help families better understand the changes they’re noticing in an older person, and whether those are out of the ordinary or not.

Since I’ve often written about changes in thinking that are abnormal and concerning in older adults, I thought it might be helpful for me to write an article outlining what is normal and to be expected.

Now, I’ll be frank. As you’ll see, most mental processes become less nimble with time. Just as your 75-year-old self can’t run as fast as your 30-year old self, your 75-year-old brain will, for the most part, not think as quickly either.

This can be discouraging news to many people. Which means they might feel reluctant to learn more about this.

But the news is not all bad. Yes, things tend to work a little slower and less well, but on the other hand older adults can often compensate by drawing on their experience. Cognitive aging also helps older adults become more optimistic and emotionally resilient, as I explain later in the article.

By better understanding cognitive aging, you’ll be better equipped to understand the older adults in your life, whether that is yourself or an older loved one.

How does cognitive aging differ from a disease or more concerning changes in mental function?

People sometimes have trouble understanding how cognitive aging is different from something more concerning, such as mild cognitive impairment, early Alzheimer’s disease, or other memory-related conditions they may have heard about.

A good explanation of the difference is available here, in the Cognitive Aging Action Guide published by the National Academy of Medicine (formerly the Institute of Medicine), which issued a fantastic report on cognitive aging in 2015.

Basically, cognitive aging is the brain’s version of your body parts working less efficiently due to age, rather than due to disease or serious damage.

This loss of efficiency is gradual. And like many other age-associated changes in the body, cognitive aging tends to happen a little differently for every person, in part due to things like genetics, lifestyle and environmental factors.

But it’s not a disease. Very importantly: cognitive aging doesn’t involve neurodegeneration or significant damage to the brain’s neurons.

So whereas Alzheimer’s disease and other conditions cause neurons to become badly damaged and eventually die, in a normal older person with cognitive aging, the brain’s neurons are basically ok, they’re just working less quickly and less well than earlier in life.

Although cognitive aging does cause certain mental processes to happen less quickly, normal cognitive aging should not impair an older person’s abilities to the point that they are visibly struggling with life tasks or no longer able to live independently.

6 Ways that Memory and Thinking Change With Aging

People often think of memory when they think of cognition or “brain function.” But there’s actually much more to thinking and the brain’s work.

Here are six key ways that cognition changes with aging.

How it changes with aging:

What it is: This is a broad category covering the ability to remember information. Key sub-types include:

Memory is actually a complicated topic. There are many other subtypes of memory, and experts are also still debating just how to categorize and explain the many different ways that people remember information or how to do things.

It’s also technically a different task for the brain to create a memory (this is sometimes called encoding) versus to retrieve it. So a person may have trouble remembering something either because they had difficulty encoding it in the first place, or because they are having difficulty promptly retrieving it.

How memory changes with aging: Many aspects of memory do decline with age, but not all:

What it is: Attention is the ability to concentrate and focus on something specific, so that the related information can be processed. Key sub-types include:

How it changes with aging: Some aspects of attention do get worse with aging. Specifically:

What they are: Language skills cover a variety of abilities related to understanding and producing both verbal language and written language.

How they change with aging:

What it is: This refers to the mental skills that are needed for activities related to planning, organizing, problem-solving, abstract thinking, mental flexibility, and appropriate behavior. Executive function allows people to do things such as:

How it changes with aging: Executive function generally declines with age, especially after age 70.

What it is: This refers to the ways one processes and regulates emotions, especially the negative ones. Examples include:

How it changes with aging: Older adults experience several changes that generally make them more positive and optimistic. These include:

Crystallized versus fluid intelligence in aging

Crystallized intelligence gets better or stays stable as people get older. This experience and wisdom does enable older adults to compensate for some of the decline in processing speed and other ability. It also means that older adults may perform better than younger people at those mental tasks that require depth of experience or knowledge.

Fluid intelligence, on the other hand, refers to abilities related to processing power, taking in new information, problem-solving with new or less familiar information, and reacting quickly.

Fluid intelligence is at its peak when we are younger adults, and then declines over time.

How to tell cognitive aging apart from more worrisome changes

It’s true that some very common brain problems, such as very early Alzheimer’s disease, can be very hard to tell apart from changes due to cognitive aging.

If you’re concerned that certain symptoms might be early Alzheimer’s, I recommend taking a look at the Alzheimer’s Association’s handy list of “10 Early Signs and Symptoms of Alzheimer’s.”

What is nice about the Alzheimer’s Association’s resource is that for every early sign, they give an example of a normal change due to cognitive aging.

If you are wondering whether certain changes might qualify as “mild cognitive impairment” (MCI), then you’ll probably need to ask your health provider for more assistance in assessing memory and other cognitive domains.

In general, the diagnosis of MCI requires objective evidence of cognitive difficulties that is beyond what would be considered normal, but not bad enough to qualify as dementia. In other words, in MCI, cognitive testing should reveal that a person does worse than expected for his/her age and level of education. But the person should still be able to manage daily life tasks.

Otherwise, there are some signs and symptoms that are very unlikely to be due to cognitive aging alone. These include:

If you notice any such symptoms, it’s important to not assume this is “normal aging.” Instead, I recommend learning more about these symptoms and then bringing them up to your usual health providers. Such changes in behavior can be caused by a variety of different health conditions, none of which should be ignored.

You can learn more about what can cause paranoia and other forms of “late-life psychosis” here: 6 Causes of Paranoia in Aging & What to Do.

I also explain what should be done during a primary care evaluation for cognitive impairment here: Cognitive Impairment in Aging: 10 Common Causes & 10 Things the Doctor Should Check.

Last but not least, if you’ve gotten worried about an aging parent’s memory: my new book was written for you, and will walk you through what to do. You can learn more here.

Practical Takeaways & What You Can Do

In short, cognitive aging means that as we get older, our mental functions become less nimble and flexible, and many aspects of our memory get a little worse.

We also become more easily distracted by busy environments, and it takes more effort to work through complex problems and decisions.

But, this can make it harder for older adults to plan ahead to avoid problems, or to think through decisions that generate negative emotions. These changes to the aging brain can also make older adults more susceptible to deception and financial exploitation.

(This NYTimes story about an older man’s misread of a younger woman’s intentions seems to illustrate how optimism in late-life can be problematic.)

Can anything be done about cognitive aging?

It’s not really possible to prevent all cognitive aging. But there certainly are things that you can do! I would categorize them into two key categories:

1.Take steps to optimize and maintain your brain function.

These include a variety of sensible “brain-healthy” actions such as making sure to get enough sleep, exercising, not smoking, being careful about medications that affect brain function, and more. Here are some useful resources that provide a more detailed list of suggested actions:

There’s no need to seriously limit oneself in later life, just because the brain isn’t quite as quick and nimble as it used to be.

That said, it’s probably a good idea to consider making a few sensible accommodations to the aging brain. These might include:

I must say that after researching this article, I found myself thinking that we should all consider making an effort to deal with big complicated mental tasks (e.g. estate planning, advance care planning) sooner rather than later.

Because the longer one waits, the harder it becomes for the brain to think through complicated decisions.

For more on cognitive aging

Here are some of the resources that I found especially helpful, in researching this article:

Any questions or comments on cognitive aging? Post them below!

*Note: Links to products on Amazon are affiliate links. We are now participating in the Amazon Associates affiliate program, so if you buy through links on our site, Better Health While Aging will earn a small commission, at no additional cost to you. Thank you for your support!
[This article was reviewed and minor updates were made in December 2022.]