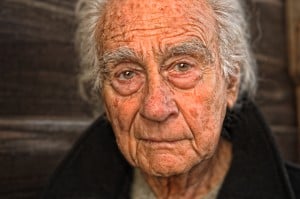 This month I am featuring a series of posts about aging, health crises, and (possible) end-of-life situations. Earlier this week, I shared the story of Mrs. F, a very ill older woman with cancer who said she didn’t want to go to the hospital, even though she wasn’t on hospice.

Now, I want to share another true story, about a nonagenarian with cancer. He was DNR and we had planned for comfort care once his symptoms got worse. But when he fell dangerously ill, I ended up advocating for him to go to the Intensive Care Unit. Below is the story, with tips for caregivers at the end.

[This story was first published in 2010, on Caring.com’s Older Patients Wiser Care blog.]

The case: An unlikely candidate for intensive care

Some people in their 90s are lucky enough to still be strong and independent, but Mr. H wasn’t one of them. He’d been wheelchair-bound ever since a bad hip fracture a few years prior cost him his ability to walk. He also had mild dementia, which made him somewhat forgetful and disorganized.

Nonetheless, this WWII veteran was a perennially cheerful presence in our VA’s Nursing Home Care Unit, always eager to join in on activities and outings. “Thank God for the VA!” he’d tell me when I’d come see him for his monthly medical check-ups.

But his smile faded the day we explained that we’d discovered a colon cancer, which had spread to his liver.

For years, Mr. H’s records showed he wanted do-not-resuscitate/do-not-intubate (DNR/DNI). Now that he had advanced cancer, he and his son asked that all future medical care focus on maintaining comfort, function, and quality of life for as long as possible. Treatment of infections was okay if we thought there was a good chance of success. And they wanted to consider hospice once Mr. H was having more pain or other end-of-life symptoms.

Being the cheerful and forgetful type, Mr. H was soon back to his usual activities in the nursing home. Over the next three months, we all practically forgot he had advanced cancer.

That is, until the day that nurses found him weak and feverish in bed, with low blood pressure. The ER doctors found that Mr. H had a bad urinary tract infection (UTI) and IV antibiotics were started. When his blood pressure continued to drop, the Intensive Care Unit (ICU) team was called: When bad infections cause life-threatening low blood pressure, patients need ICU care.

The ICU doctor, however, balked. “He’s very old, has metastatic cancer, is DNR/DNI, and from his chart it looks like his family doesn’t want any invasive procedures. So he’s not appropriate for the ICU.”

In his gurney, Mr. H looked at us quizzically. Despite his very low blood pressure, he was still awake and weakly smiling. But without special blood pressure medications (known as pressors) only available in the ICU, the medical staff knew it was incredibly unlikely that he’d survive this common infection.

The challenge: It’s not always easy to turn goals and care plans into actions

The ICU doctor had a legitimate point. The goals of Mr. H’s medical care were supposed to be maintenance of comfort, function, and quality of life. For elderly people with advanced cancer, who are unlikely to live more than several months no matter what medical care they get, ICU-level care generally doesn’t help advance those goals.

Still, I found myself hesitating to switch to comfort care. Despite his many medical problems, Mr. H had been maintaining his function and his quality of life. Like many people with advanced illness, Mr. H had said he’d prefer to be treated for reversible medical problems, such as infections, especially if the chance of recovery were good, and the treatment wouldn’t be too burdensome. I felt that with pressors and antibiotics he had a decent shot at recovery from his UTI.

The catch was that Mr. H had more than a garden-variety UTI. Whereas many UTIs can be treated with oral antibiotics, Mr. H’s infection had spread to his bloodstream. To treat it, he would need to have a central catheter threaded into one of the big veins of his neck or groin; it’s not possible to give pressors through the more common small IVs that are placed in the hand or arm. But would he find a central catheter, and ICU care, too burdensome?

“Ask him what he thinks,” said the ER doctor.

“You’re my doctor. I trust you to tell me what to do,” quavered Mr. H.

The solution: A limited trial of intensive care to balance the benefits and burdens

We were running out of time to discuss: Mr. H’s blood pressure kept dropping. I called his son. “Normally I don’t recommend ICU care for people of his age and medical condition,” I said, “but in this particular case, one reasonable option would be to try 24 to 48 hours of ICU care, to see if we can turn him around. He might get better. But if he gets worse, we would make him as comfortable as possible until he dies.”

The son agreed, and Mr. H was whisked up to the ICU.

The next day, I found him sitting up with a breakfast tray, his central catheter taped to the side of his neck. After 12 hours of pressors and antibiotics, his fever had gone away, and his blood pressure had improved to the point he no longer needed the pressors.

“The nurses have been nice but I don’t like it here,” he complained. “Can I go back to the nursing home today?”

Three days later, Mr. H was discharged back there, where he re-engaged in his favorite activities and remained active for another 10 weeks. Eventually he became weaker and was transitioned to hospice.

He died peacefully in his bed, five months to the day after his admission to the ICU.

My take-home points for family caregivers:

Have you ever struggled with how to manage a health crisis in a frail older person like Mr. H? I’d love to hear from you in the comments section below.

« The Power of Offering Alternatives: a true end-of-life story
5 Tips to Help You With End-of-Life Planning »