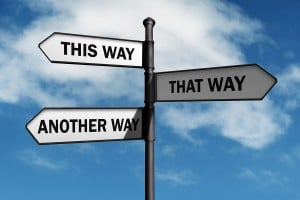 How might we help a sick older person have a better end-of-life experience? Planning for future health crises and end-of-life situations — a process known as advance care planning — is certainly important.

But, not every health crisis can be completely planned for. And it’s often hard, in the moment, for family members and doctors to figure out how to honor a person’s wishes. Below, I’d like to share a true story about a dangerously ill older woman, who wasn’t on hospice but said she didn’t want to go to the hospital.

As I puttered around my house one Saturday morning, my pager went off. “Dr. Kernisan? This is Tina from the nursing home. We’re calling you about Mrs. F. She’s 78 and has a diagnosis of advanced lymphoma. She’s been anemic and just got a blood transfusion again a few days ago. She’s now very weak, pale, and her blood pressure is low. Her poop looks red.”

Although by then I had fired up my computer and was remotely logging in to Mrs. F’s chart, this sounded like a no-brainer. I didn’t know Mrs. F personally, but that weekend I was on call by phone for our medical group’s nursing home. From the brief description, Mrs. F sounded critically ill, and was probably bleeding internally. She needed hospitalization ASAP.

“But she says she doesn’t want to go to the ER,” the nurse continued. “She says she hates the hospital and wants to stay in the nursing home.”

This stopped me short. “Is there an advance directive in her chart? Is she usually able to make medical decisions?” I asked.

“It says she is DNR, but it looks like that was just decided a few weeks ago. It says transfer to the hospital is ok. It looks like she’s been offered hospice, but she hasn’t signed up for it. She does usually make medical decisions.”

I frowned at my computer screen, scrolling through Mrs. F’s chart. She definitely sounded dangerously ill. She had to be hospitalized, probably in the Intensive Care Unit.

The challenge: Difficult choices at the (possible) end of life

The modern hospital is a miraculous place. Today, doctors routinely save people from medical disasters that were unstoppable just 25 years ago. But this magic often comes at a cost. Most people find the hospital to be, at best, uncomfortable and stressful. And being in the hospital always comes with a small risk of complications, such as falls, extra infections, or medication mishaps.

Still, most of the time, the benefits outweigh the burdens and risks. But this balancing of pros and cons gets trickier when a person is terminally ill, like Mrs. F. Even though her cancer was advanced, and she had decided she didn’t want CPR if her heart suddenly stopped, her chart showed that she’d been accepting fairly intensive medical treatments. This was surely helping to keep her alive.

Yet it also sounded like she was starting to get tired of the medical merry-go-round, and was perhaps considering a transition to hospice. I decided to suggest that she go to the ER for more evaluation. Perhaps she could get a blood transfusion, and then we’d see if she could return to the nursing home at the end of the day.

She agreed. An hour later, the ER doctor called me with an update: “She’s definitely having some bleeding from her bowels or stomach. Her family is here. I’ve told them she has to go to the Intensive Care Unit, and she’s agreed to go.”

I felt troubled. I had full confidence in the ER’s medical assessment. If the hospital team stabilized her and found the cause of her bleeding, she’d probably live longer. Yet she’d said earlier that she didn’t want to be in the hospital. No matter what we did, Mrs. F. probably didn’t have much time left. Yet now she was off to intensive care. Was that the only option we could offer?

The solution: The power of offering alternatives

I took a deep breath. “Well, if she wants to go to the ICU, she should. But I noticed in the chart that she’s considered hospice. We should be sure that she and her family know that there’s an alternative to the ICU. If you tranfuse her in the ER now, she’ll probably feel better than she does now. Then we can take her back to the nursing home tonight, where she can be more comfortable.”

“But what if she keeps bleeding? What if she gets worse? She could die,” protested the ER doctor.

There was a pause on the other end. “You’d better explain this option to her family,” said the ER doctor. A moment later, Mrs. F’s daughter was on the line. “This decision isn’t mine to make,” she said after listening to me. She sounded scared. “Let me put my mother on the phone.”

Mrs. F. was tranfused two units of red blood cells in the ER for her comfort and stability, and went back to the nursing home later that evening.

The nurses didn’t call me about her that night, nor the following day, which was Sunday.

Mrs. F. died on Monday, in the nursing home. By then her usual primary care doctor was back covering her care. He told me that Mrs. F. had been weak and tired but otherwise comfortable. “I’m glad you recommended hospice-style care in the nursing home to her,” he said.

“I didn’t recommend anything,” I said. “All I did was let her know of an alternative.”

My take-home points for family caregivers: Doctors are trained to save lives, and for most people, this is a wonderful thing. But for some people, staying alive as long as possible is no longer the highest priority. If this is the case for your loved one, consider asking doctors to discuss alternatives. Often it’s possible to come up with another plan of care that may be a better fit for a sick person’s needs.

Even those people who have not signed up for hospice will sometimes prefer less medically-intensive care. If available, a consultation with a geriatrician or palliative care team can help identify alternative options.

Have you had difficulty figuring out how to honor an older person’s healthcare wishes? Have you struggled with planning for end-of-life situations? I’d love to hear from you in the comments section!

« How You Can Help Someone Stop Ativan
A Trial of ICU Care: a true end-of-life story »