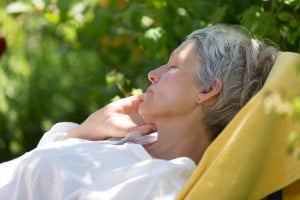 What should you do if an older person complains of not sleeping well at night?

Experts do believe that “normal aging” brings on some changes to sleep. (See this post for more on how sleep changes with aging.) Basically, older adults tend to get sleepy earlier in the evening, and tend to sleep less deeply than when they were younger.

So it’s probably not realistic to expect that as you get older, you’ll sleep as long or as soundly as when you were younger.

That said, although aging by itself does change sleep, it’s also quite common for older adults to develop health problems that can cause sleep disturbances. So when your older relatives say they aren’t sleeping well, you’ll want to help them check for these. Figuring out what’s going on is always the first step in being able to improve things.

Last but not least, if you (or your older relative) have experienced the very common combination of waking up to pee at night and difficulty sleeping, I highly recommend listening to this podcast episode, which features a geriatrician who is an expert on this: 092- Interview: Addressing Nighttime Urination & Insomnia in Aging.

Common health conditions that can disrupt sleep in older adults include:

If an older person is having difficulty sleeping, it’s important to make sure that one of these common conditions isn’t contributing to the problem. Treating an underlying problem — such as untreated pain at night — can often improve sleep. It can also help to talk to a pharmacist about all prescription and over-the-counter drugs, to make sure that these aren’t contributing to insomnia.

Alzheimer’s and related dementias pose special considerations when it comes to sleep, which I write about in this post: How to Manage Sleep Problems in Dementia.

How common it is: The likelihood of having sleep-disordered breathing disorders goes up with age. It’s also more common in men, and in people who are overweight. In one study of 827 healthy older adults aged 68, 53% were found to have signs of SRBD, with 37% meeting criteria for significant sleep apnea. Interestingly, most participants did not complain of excess sleepiness.

Why it’s a problem: Studies have found that untreated OSA is associated with poor health outcomes including increased mortality, stroke, coronary artery disease, and heart failure. However,  studies also suggest that these associations are strongest in people aged 40-70, and weaker in older adults. For older adults with symptomatic OSA, treatment can reduce daytime sleepiness and improve quality of life.

What to do if you’re concerned: Helpguide.org’s page on sleep apnea has a useful list of common symptoms and risk factors for sleep apnea. You can also ask the doctor about further evaluation if you’ve noticed a lot of daytime sleepiness. To be diagnosed, you’ll need to pursue polysomnography (objective sleep testing) either in a sleep lab or with a home sleep testing kit.

Whether or not you pursue an official diagnosis for SRBD, avoiding alcohol (and probably other sedatives) is likely to help.

3. Restless leg syndrome (RLS). This condition causes sensations of itching, crawling, or restlessness as a person is trying to fall asleep. The symptoms are unpleasant but not usually painful, and improve with movement. The exact biological underpinnings of this problem remain poorly understood, but it seems to be related to dopamine and iron levels in the brain. Most cases are not not thought to be related to neurodegeneration.

How common it is: Studies suggest that 5-15% of the general population meet criteria for RLS, but only 2.5% of people are thought to have clinically severe symptoms. Poor health, older age, low iron levels, and being female are some risk factors. It also tends to run in families.

Why it’s a problem: RLS has been associated with depression, anxiety, and sleep-onset insomnia. It can also get worse with certain types of medication.

What to do if you’re concerned: Read up on RLS (Helpguide.org’s page seems very good) and then talk to a doctor. Generally, you don’t need polysomnography but you should probably be checked for low iron levels. You can read about possible non-drug and pharmacological treatment options at Helpguide.org.

4. Periodic Limb Movements of Sleep (PLMS). This condition is not easily treatable, but I’m listing it since I’ve discovered it’s much more common than I realized. PLMS causes intermittent movements while asleep, usually in the lower limbs. It can affect the toes, ankles, knees, or hips. The movements may or may not wake the person up; they can be annoying to a bed partner.

How common it is: Studies estimate that 45% of older adults experience PLMS. Many such older adults are otherwise healthy. However, PLMS is also often associated with other sleep problems, such as restless legs and sleep apnea. Experts believe that it’s fairly rare for people to experience clinically significant sleep disturbances solely due to PLMS.

Is it a problem? PLMS can be an issue mainly because it’s associated with other sleep problems. Most people who experience PLMS don’t notice it much, although some do find it bothersome. Only a few studies have attempted to treat isolated PLMS, and it’s not clear that there is a reliable way to treat this. In its 2012 guideline on treating restless leg syndrome and PLMS, the American Academy of Sleep Medicine concluded that there was “insufficient evidence” to recommend pharmacological treatment.

5. Insomnia. Insomnia means having difficulty falling asleep or staying asleep, despite the opportunity to do so (e.g. being in bed), and experiencing decreased daytime function because of this. I consider this the grand-daddy of all sleep problems, because it affects so many people in middle-age and older age.

How common is it: Very common, and it becomes even more common with aging. One study found that 23-24% of older adults reported symptoms of insomnia.

Why it’s a problem: Insomnia has been associated with anxiety, depression, fatigue, worse quality of life, cognitive decline, and a variety of other worse long-term health outcomes.

What to do if you’re concerned: The main thing to do is assess the problem, by tracking sleep and using a sleep journal. And then seek help. For older adults, it is especially important to not simply rely on prescription or non-prescription (e.g. alcohol, over-the-counter pills) substances to help with sleep. That’s because all such substances worsen brain function and increase the risk of cognitive decline. (See “4 Types of Brain-Slowing Medication to Avoid if You’re Worried About Memory” for more details.)

Insomnia is a very common complaint among family caregivers and older adults. Fortunately, research has shown that it’s possible to treat insomnia effectively, although it does often take a little time and effort.

Before I go into the recommended treatments, let me say it again: you should only use sedatives as a last resort. That’s because most medications that make people sleepy are bad for brain function, in both the short-term and long-term.

Benzodiazepines such as lorazepam, alprazolam, diazepam, and temazepam (Ativan, Xanax, Valium, and Restoril) are also habit-forming. It can be a lot of work to wean people off these drugs, but research has proven it’s possible.

For instance, in this randomized control study, many older adults who had been on benzodiazepines for sleep (mean duration of use was 19.3 years!) were able to taper off their sleeping pills. 63% were drug-free after 7 weeks. (Yeah!)

Plus, in my own personal experience, it becomes extremely difficult once a person has started to develop a dementia such as Alzheimer’s, because then their behavior and thinking can get a lot worse if they are a little sleep-deprived or anxious. (In the short-term, almost everyone who tapers off of sedatives has to endure a little extra restlessness while the body adapts to being without the drug.) But letting them continue to use their benzodiazepine puts us in a pickle, because it also keeps them from having the best brain function possible, is associated with faster cognitive decline, AND increases fall risk.

I hope you see what I’m getting at. If either you or someone you care for are taking benzodiazepines for sleep or anxiety, and you aren’t dealing with a dementia diagnosis, now is the time to do the work of trying to get off these drugs. (If you are dealing with a dementia diagnosis, you should still ask the doctors for help trying to reduce the use of these drugs, but it will all be harder. It’s still often possible to at least reduce the doses being used.)

The key to successfully stopping sedatives for sleep is to very slowly taper the drug under medical supervision, plus add cognitive-behavioral therapy or other sleep-improving approaches if possible.

For more on this topic, and for a handy (and research-proven) consumer handout that helps older adults stop benzodiazepines, see “How You Can Help Someone Stop Ativan.” This article also addresses the question of whether it’s ever okay for an older person to be on benzodiazepines.

Are there any medications or supplements that are safe and effective?

Benzodiazepine drugs and sleeping medications such as zolpidem (brand name Ambien) are definitely risky for older adults, as they dampen brain function and worsen balance. If you or your loved one is depending on such medications to sleep, I recommend you get help tapering off, as described above. Most older adults can learn to sleep without these medications, although it can take a little effort to wean off the drug and learn to get to sleep without them.

Many over-the-counter (OTC) medications that make people sleepy are also a problem, because most of them are “anticholinergic,” which means they interfere with a key neurotransmitter called acetylcholine. A very commonly used anticholinergic is diphenhydramine (brand name Benadryl), a sedating antihistamine that is included in most night-time analgesics, but many prescription medications are anticholinergic as well.

Older adults should be very careful about using anticholinergics often for sleep, or really for anything. That’s because they worsen brain function, and in fact, chronic use of these medications has been associated with developing Alzheimer’s and other dementias. (For more on this, see 7 Common Brain-Slowing Anticholinergic Drugs Older Adults Should Use With Caution.)

Virtually all sedatives are included in the American Geriatrics Society Beers Criteria® for Potentially Inappropriate Medication Use in Older Adults.

So those are the medications to avoid if possible.

Now here are a few medications that seem to be less risky, and are sometimes used:

And again, if you or your older relative has been bothered by the need to urinate at night, I also want to recommend this BHWA podcast episode: 092- Interview: Addressing Nighttime Urination & Insomnia in Aging.

Now that we’ve covered the top causes of sleep problems in older adults and some proven ways to treat insomnia, I’d love to hear from you.

What sleep problems have you been concerned about? And what’s helped you improve them so far?

For information on evaluating and managing sleep problems in people with Alzheimer’s or other dementias, see this article: How to Manage Sleep Problems in Dementia.

This article was last updated by Dr. K in August 2022.

« Leg Swelling in Aging: What to Know & What to Do
Vitamin D: the Healthy Aging Dose
(Plus Answers to 7 FAQs) »