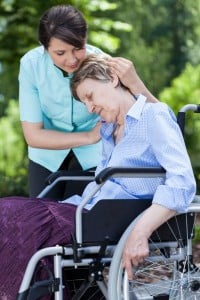 With all the news about opioids and benzodiazepines, and their risk of death, I would love to hear your take on the use of these drugs in hospice.

We’ve had two family experiences now (my Mom and my Aunt) who were given these drugs right away when they went on hospice…without hospice trying anything else first that would be less dangerous. My Mom was up and about walking one day at her memory care facility, even laughing. The next day, when hospice put her on morphine and Ativan, she was in a coma. She died 13 days later without ever regaining consciousness. When I protested and asked why she wasn’t waking up, the hospice nurse said, “It’s not the drugs, it’s the disease.” (Mom had dementia.) The nurses wouldn’t let us give her fluids (“you don’t want your mother to aspirate, do you?”) or feed her (“you don’t want your mother to choke, do you?”).

With my Aunt, she had also been in the memory care facility and got to the point of needing a two-person assist. Her power of attorney (POA) was given the choice of moving my Aunt into a nursing home or bringing in hospice. Hospice immediately gave her morphine and Ativan, then backed off the Ativan and gave her morphine every two hours until she died 3 days later.

Now the third sister, also with dementia, has been in hospice for two months and counting. She is lucid most days, eating/drinking, comfortable—all without the opioid/benzo drug combo, because of our experience.

How can family members identify a hospice that doesn’t use this troubling combination of drugs from the start, without first trying something less dangerous, to make a patient “comfortable”?

A: Thanks for sending in this question. I’m very sorry to hear that your experiences with hospice have left you concerned.

It is indeed extremely common for hospice to use morphine and lorazepam (brand name Ativan) to treat end-of-life symptoms. That’s because many people on hospice are suffering from troubling symptoms that these medications can relieve, such as pain, shortness of breath, anxiety, and agitation.

Still, these medications are not always necessary. They are supposed to be prescribed and used as required to relieve the dying person’s symptoms, not by default. So the situation you describe with your mother and your aunt does sound potentially concerning. At a bare minimum, the hospice personnel should have done a better job of discussing their proposed care plan with your family.

Now let me be clear: I cannot say if the way they prescribed morphine and lorazepam was inappropriate or not, because it’s impossible for me to know the specifics of your mother and aunt’s medical situation.

Still, we can certainly review some basics about hospice care for people with Alzheimer’s and related dementias, as well as recommended best practices, when it comes to using opioids and benzodiazepine sedatives.