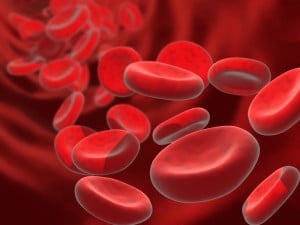 Have you ever been told that an older relative has anemia?

Or perhaps you noticed the red blood cell count flagged as “low” in the bloodwork report? Or noticed “low hemoglobin” in a doctor’s report?

Anemia means having a red blood cell count that is lower than normal, and it’s very common in older adults. About 10% of independently living people over age 65 have anemia. And anemia becomes even more common as people get older.

But many older adults and families hardly understand anemia.

This isn’t surprising: anemia is associated with a dizzying array of underlying health conditions, and can represent anything from a life-threatening emergency to a mild chronic problem that barely makes the primary care doctor blink.

Still, it worries me that older adults and families don’t know more about anemia. If you or your relative has this condition, it’s important to understand what’s going on and what the follow-up plan is. (I’ve so often discovered that a patient didn’t know he or she had had anemia!) Misunderstanding anemia can also lead to unnecessary worrying, or perhaps even inappropriate treatment with iron supplements.

And since anemia is often caused by some other problem in the body, not understanding anemia often means that people don’t understand something else that is important regarding their health.

Fortunately, you don’t have to be a doctor to have a decent understanding of the basics of anemia.

Anemia means having a lower-than-normal count of red blood cells circulating in the blood.

Red blood cells are always counted as part of a “Complete Blood Count” (CBC) test, which is a very commonly ordered blood test.

By convention, to detect anemia clinicians rely on the hemoglobin level and the hematocrit, rather than on the red blood cell count.

A “normal” level of hemoglobin is usually in the range of 14-17gm/dL for men, and 12-15gm/dL for women. However, different laboratories may define the normal range slightly differently.

If clinicians detect anemia, they usually will review the mean corpuscular volume measurement (included in the CBC) to see if the red cells are smaller or bigger than normal. We do this because the size of the red blood cells can help point doctors towards the underlying cause of anemia.

Hence anemia is often described as:

The red blood cells in your blood use hemoglobin to carry oxygen from your lungs to every cell in your body. So when a person doesn’t have enough properly functioning red blood cells, the body begins to experience symptoms related to not having enough oxygen.

Common symptoms of anemia are:

However, it’s very common for people to have mild anemia — meaning a hemoglobin level that’s not way below normal — and in this case, symptoms may be barely noticeable or non-existent.

That’s because the severity of symptoms depends on two crucial factors:

This second factor is very important to keep in mind. The human body does somewhat adapt to lower hemoglobin levels, but only if it’s given weeks or months to do so.

So this means that if someone’s hemoglobin drops from 12.5gm/dL to 10gm/dL (which we’d generally consider a moderate level of anemia), they are likely to feel pretty crummy if this drop happened over two days, but much less so if it developed slowly over two months.

People sometimes want to know how low the hemoglobin has to be for anemia to be “severe.” This really depends on the past medical history of the person and on how fast the hemoglobin dropped, but generally, a hemoglobin of 6.5 to 7.9 gm/dL is often considered “severe” anemia.

People also sometimes want to know how low can hemoglobin go before causing death. In general, a hemoglobin less than 6.5 gm/dL is considered life-threatening. But again, how long the body can tolerate a low hemoglobin depends on many factors, and including whether the hemoglobin is continuing to drop quickly (due an internal bleed, for instance) or is slowly drifting down.  A study of Jehovah’s Witnesses who died after refusing transfusions found that those with hemoglobins between 4.1 to 5 gm/dL died, on average, about 11 days later.

The most common causes of anemia in aging adults

Whenever anemia is detected, it’s essential to figure out what is causing the low red blood cell count.

Anemia happens when something goes wrong with these normal processes. In kids and younger adults, there is usually one cause for anemia. But in older adults, it’s quite common for there to be several co-existing causes of anemia.

A useful way to think about anemia is by considering two categories of causes:

Here are the most common causes of low hemoglobin for each category:

Problems losing red blood cells. Blood loss causes anemia because red blood cells are leaving the blood stream. This can happen quickly and obviously, but also can happen slowly and subtly. Slow bleeds can worsen anemia by causing an iron-deficiency, as noted above. Some examples of how people lose blood include:

There is also a third category of anemias, related to red blood cells being abnormally destroyed in the body before they live their usual lifespan. These are called hemolytic anemias and they are much less common.

A major study of causes of anemia in non-institutionalized older Americans found the following:

Once anemia is detected, it’s important for health professionals to do some additional evaluation and follow-up, to figure out what might be causing the anemia.

Understanding the timeline of the anemia — did it come on quickly or slowly? Is the red blood count stable or still trending down with time? — helps doctors figure out what’s going on, and how urgent the situation is.

If the anemia is bad enough, or if the person is suffering significant symptoms, doctors might also consider a blood transfusion. However, although even mild anemia has been associated with worse health outcomes, research suggests that transfusing mild to moderate anemia generally isn’t beneficial. (This issue especially comes up when people are hospitalized or acutely ill.)

What to ask the doctor about anemia

If you are told that you or your older relative has anemia, be sure you understand how severe it seems to be, and what the doctors think might be causing it. This will help you understand the plan for follow-up and treatment.

Some specific questions that can be handy include:

Be sure to request and keep copies of your lab results. It will help you and your doctors in the future to be able to review your past labs related to anemia and any related testing.

A very common diagnosis in older adults is iron-deficiency anemia. If you are diagnosed with this type of anemia, be sure the doctors have checked a ferritin level or otherwise confirmed you are low on iron.

I have actually reviewed medical charts in which a patient was prescribed iron for anemia, but no actual low iron level was documented. This suggests that the clinician may have presumed the anemia was due to low iron.

However, although iron deficiency is common, it’s important that clinicians and patients confirm this is the cause, before moving on to treatment with iron supplements. Doctors should also assess for other causes of anemia, since it’s very common for older adults to simultaneously experience multiple causes of anemia (e.g. iron deficiency and vitamin B12 deficiency).

If an iron deficiency is confirmed, be sure the doctors have tried to check for any causes of slow blood loss.

It is common for older adults to develop microscopic bleeds in their stomach or colon, especially if they take a daily aspirin or a non-steroidal anti-inflammatory drug (NSAIDs) such as ibuprofen. (For this reason — and others — NSAIDs are on the Beer’s list of medications that older adults should use with caution.)

Bear in mind that iron supplements are often quite constipating for older adults. So you only want to take them if an iron-deficiency anemia has been confirmed, and you want to make sure any causes of ongoing blood loss (which causes iron loss) have been addressed.

The most important take home points on anemia in older adults

Here’s what I hope you’ll take away from this article:

1.Anemia is a very common condition for older adults, and often has multiple underlying causes.

2. Anemia is often mild-to-moderate and chronic; don’t let the follow-up fall through the cracks.

3. If you are diagnosed with anemia or if you notice a lower than normal hemoglobin on your lab report, be sure to ask questions to understand your anemia. You’ll want to know:

4. If you are diagnosed with low iron levels: could it be from a small internal bleed and could that be associated with aspirin, a non-steroidal anti-inflammatory medication such as ibuprofen, or another medication?

5. Keep copies of your lab reports.

6. Make sure you know what the plan is, for following your blood count and for evaluating the cause of your anemia.

Note: We have reached over 200 comments on this post, so comments will now be closed. If you have a question, chances are it’s already been asked and answered. Thank you!

You may also find it helpful to read these related articles:
Understanding Laboratory Tests: 10 Commonly Used Blood Tests for Older Adults
How to Avoid Harm from Vitamin B12 Deficiency

This article was first published in 2016 & minor updates were made in Jan 2023. (The fundamentals of anemia in older adults don’t change much over time.)

« Deprescribing: How to Be on Less Medication for Healthier Aging