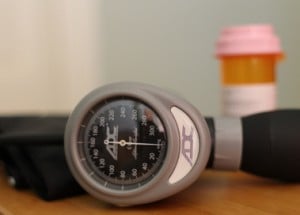 In the summer of 2016, a major study about hypertension treatment in older adults was published in the prestigious JAMA journal: “Intensive vs Standard Blood Pressure Control and Cardiovascular Disease Outcomes in Adults Aged ≥75 Years: A Randomized Clinical Trial.”

When an important study like this is published, people often wonder: does this mean they should change the way their hypertension — or their parent’s hypertension — is being managed? Is their blood pressure (BP) at a good level? Should they be on more medication?

In this post, I review the most essential things to know about these blood pressure research findings. This will enable you to take full advantage of a related post, in which I share with you a step-by-step process you can use, to start to figure out whether an older person’s BP management plan might need to be revised.

Warning: this is one of those medically nerdy posts. But I have to write it, as it’s a foundation for later answering your questions on what your parents’ BP (or your own BP) should be, and whether you should consider a change in medication or treatment. If you just want to know the essentials, skip down to the key takeaways at the end.

This study is a sub-group analysis of the SPRINT (Systolic Blood Pressure Intervention Trial) research trial that was published last fall. The original SPRINT study enrolled 9361 adults aged 50+. This recently published analysis covers the results for the 2636 participants who were aged 75 or older.

I wrote about the SPRINT study in detail last year, because it caused quite a tizzy in the mainstream media, as well as in the medical community.

Briefly: SPRINT was a large, well-done randomized trial which found that participants experienced significantly fewer cardiovascular events (e.g. heart attacks, strokes, etc)  when they were treated to a goal of systolic blood pressure of 120 (intensive hypertension treatment) rather than 140 (standard hypertension treatment).

[Note: The top number in a blood pressure reading is the “systolic blood pressure” and is generally the number of interest when it comes to treating hypertension in older adults. It is abbreviated “SBP.” The lower number is the “diastolic blood pressure.” The unit of measurement for BP is “millimeters of mercury” or “mm Hg.”]

SPRINT caused a bit of an uproar, because just two years prior, in December of 2013, major new hypertension guidelines had been released. And for the first time, these had proposed a higher blood pressure  treatment goal for adults aged 60 or older: 150/90. So the SPRINT results had seemed to contradict the previous guidelines, which was a bit confusing for many people and even many doctors.

[If you’d like to understand the SPRINT study in depth and also the December 2013 expert hypertension guidelines, be sure to read this post: What the New Blood Pressure Guidelines — & Research — Mean For Older Adults.” This post includes a detailed description of the BP medications used in SPRINT.]

Now this sub-group analysis of SPRINT has been published.  Dubbed “SPRINT-Senior,” the study found that in these participants who were aged 75+, treating hypertension to a goal of SBP <120 resulted in better cardiovascular health outcomes, compared to treating to a goal of SBP <140.

Let’s dig into the details a bit. Remember, whenever you hear that a treatment is “better,” you should ask yourself “how much better” and “what are the risks and burdens?”

The authors calculated that over 3.14 years, “the number needed to treat (NNT) estimate for the primary outcome was 27 and for all-cause mortality it was 41.”

In other words, if you are like the study participants, and if you decide to switch from a systolic BP goal of <140 to a goal of <120, over about three years you’ll have:

(This is not surprising. A risk-reducing intervention usually is more effective if people have a higher baseline risk of having the problem. Since age is a very strong risk factor for having a cardiovascular event, it makes sense that we are seeing better risk-reduction in these older participants.)

Now, a 1-in-27 chance of avoiding a cardiovascular event may not sound like much to some people. But from a prevention perspective, that’s considered a pretty good risk reduction. For comparison, when people with known cardiovascular disease take a statin to lower cholesterol and lower their risk, they have a 1-in-83 chance of avoiding death due to taking the statin.

What about in older adults who are frail? Do they benefit from a lower BP goal as well? SPRINT-Senior found that they do: the researchers did assess the frailty level of participants, and found that intensive treatment provided a similar risk reduction (for cardiovascular events and for mortality) as in non-frail participants.

Serious adverse events were fairly common in both treatment groups, affecting about 48% of participants in each group. Interestingly, the rate of specific adverse events was not statistically different between intensive treatment versus standard treatment.

A common adverse event was orthostatic hypotension, which means blood pressure that drops when a person stands up. This affected about 21% of participants in both treatment groups.

This was a large well-done study of blood pressure management in adults aged 75 or older. This sub-group analysis of SPRINT indicates that in people similar to the SPRINT participants, intensive BP control is even more likely to be beneficial as people get older.

Interestingly, SPRINT-Senior did not find that adverse events were more common in the intensively-treated group.

Caveats to Consider: Do the SPRINT-Senior Results Apply to YOU?

Before you start debating whether a 1-in-27 chance of avoiding a cardiovascular event is worth the hassle of taking an additional blood pressure medication every day, you must consider two very important issues:

A randomized control trial tells us what kind of treatment benefit we might expect assuming a patient is like the participants in the trial.

The SPRINT study, which included the SPRINT-Senior cohort, excluded participants who had a number of common conditions. Specifically, older persons with any of the following diagnoses, conditions, or circumstances were not eligible for the study:

As you can see, quite a lot of common diagnoses and circumstances were grounds for exclusion from the SPRINT study.

This means that if you or your older relative have any of the conditions listed above, we don’t know if you’d be likely to benefit from intensive blood pressure management the way the SPRINT participants did.

Are your doctors measuring BP the way the SPRINT team did?

This is the other major caveat to consider, before aiming for a SPRINT-style lower BP treatment goal.

Blood pressure was measured a very careful way that is quite different from the way patients usually have BP measured by their doctors. Here’s what they did in SPRINT:

Obviously, this is not the experience that most people have in the doctor’s office. Because people had to sit quietly for a few minutes in the SPRINT protocol, this likely led to lower BP measurements than those taken under usual circumstances.

SPRINT excluded participants with a history of diabetes or stroke in part because major randomized trials had already studied the effect of intensive blood pressure treatment in those groups.

For people with history of stroke, the major study evaluating the effect of treatment to a specific BP goal was called SPS3 (Secondary Prevention of Small Subcortical Strokes). This study found that randomizing participants to a goal of  SBP<130, compared to SBP 130-149, did not reduce the risk of stroke overall. However, multiple other studies have found that lower blood pressure in people with past stroke does reduce the risk of future stroke. Overall, research suggests that what may be most beneficial is reducing SBP by 10-15 mm Hg, and this may be more important (or a better treatment guide) than treating to a specific BP target.

Other Important Research on Blood Pressure in Older Adults

Both these trials found that reducing blood pressure with medication reduced the risk of cardiovascular disease in older adults. These studies were important, because for a long time doctors thought that high blood pressure was a “normal” part of getting old, and it was not clear that it was worth treating older people for hypertension.

So SHEP and HYVET convinced most doctors — including geriatricians — to take hypertension seriously in older adults.

Since SHEP and HYVET demonstrated the benefit of bringing SBP down to the 140-150 range, many of us in geriatrics have focused on this, and have not thought it was likely to be beneficial to aim for still lower SBPs.

In comparison, in SPRINT-Senior, the baseline SBP at the start of the study was 142, which is quite close to the cutoff for “normal” BP (usually defined as BP<139/89). However, participants did benefit from reducing their BP further, with the intensive BP treatment group getting down to SBP 123 on average.

Hence, SPRINT-Senior does provide new information to the medical community.

(Update 2017: The results of the SPRINT trial were incorporated into two major sets of blood pressure guidelines. Read about it here: New High Blood Pressure Guidelines Again: What the Cardiology Hypertension Guidelines Mean for Older Adults.)

So what should you take away from the SPRINT-Senior results, and the other high-quality research on treating hypertension in older adults?

My key take-aways for patients and families are as follows:

Still wondering if SPRINT means you need a change in BP medications for an older relative or yourself?

Here’s an article in which I’ll explain a process you can use, to work with your doctors and figure out whether you are likely to benefit from a change: 6 Steps to Better High Blood Pressure Treatment for Older Adults.

(Update 2017: The results of the SPRINT trial were incorporated into two major sets of blood pressure guidelines. Read about it here: New High Blood Pressure Guidelines Again: What the Cardiology Hypertension Guidelines Mean for Older Adults.)

You can also post any questions or comments below.

New Blood Pressure Study: What to Know About SPRINT-Senior & Other Research

Blood Pressure Medications Linked to Serious Falls: What you can do

Choosing & Using a Home Blood Pressure Monitor, & What to Ask the Doctor

4 Things to Try When Your Elderly Parent Seems Irrational